Last week an opportunity popped up for me to represent our organization at the Gleason Gras in New Orleans. I wasn’t the first choice (what!?) but with my colleagues tied up with Thanksgiving festivities, I jumped at the chance to go.

I looked up an old high school buddy my first 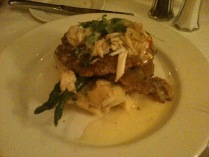 night there and we headed to Dicky Brennan’s Bourbon House just off of Bourbon Street for dinner. Bourbon Street was hopping with the Bayou Classic taking place so I was happy to duck inside away from the crowds. Brian was disapointed that Dicky’s didn’t have traditional seafood pasta which, trying a bowl of it at the Gleason Gras, I later understood why – yum! He settled on the Paneed Veal and Crab with garlic mashed potatoes, asparagus and lemon butter. I didn’t know what the etiquette was in asking to try someone’s meal when you hadn’t seen them in years but, lucky for me, Brian eagerly offered me a bite after I told him about my food blog (perks already!). If you asked me a week ago if I like veal I would probably 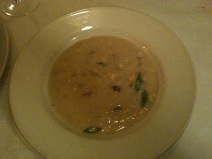 give you puppy eyes and snarkily respond that I don’t like baby animals. Apparently if they are deep fried and served with crab I like them just fine. I had the Corn and Crab Soup which was creamy and the crab really stood out, unlike a lot of soups I have had. I then had the trio of 1/2 dozen oysters served Rockefeller, Bienville, and Fonseca. I couldn’t tell you which was which now but can tell you I loved two and hated one. Helpful information, I know.

The next morning I hopped out of bed with one purpose – Cafe du Monde. I got a coffee and an order of beignets, which came in threes. I sad on a bench and opened delicately opened the bag. Yep, three in there. Still warm. 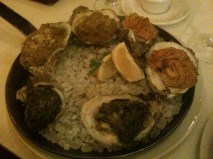 Covered in powdered sugar. I should be at the gym. Oh well, I will just eat one and save the rest for later. Next thing I knew I was holding an empty bag and had powdered sugar all over my sweater, down my jeans, and even on my running shoes (hah, running…). I’m not sure what happened but convinced myself that they were really, really small and really meant for one person. The coffee was too strong for me, even with all that sugar, so I dumped it and found a starbucks.

Later in the day I had some great food at the Gleason Gras, mostly to keep warm as it was so cold out. I had some quesedillas and that amazing creamy seafood pasta and two cups of cafe au lait which was sweet and delicious.

For my last meal in town I asked the concierge for a recommendation for a place where I could sit at a bar since I was dining solo. I was happy to hear that the staff member often eats alone herself and loves Oceana Grill on Conti Street off Bourbon about 5 blocks away. I headed over and sat at the bar downstairs and ordered a drink before noticing that they leave their front door open and after being outside all day I was chilled to the bone. I asked the bartender if they had another bar upstairs, which they 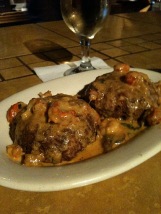 fortunately did. She led me through the upstairs dining room hollering “Alex, I got a lonely lady for you!”. Oh no, please don’t do that. Alex turned out to be a charming young lady who hollered back “Great, I wanted someone to talk to!”. I ordered the Louisiana Crabmeat Cakes appetizer with crawfish cream sauce and a side of Crawfish Etouffee and chatted with Alex about her life in New Orleans while I waited. She told me about how the hurricane affected her family (her father is a fire fighter), raising her “miracle” baby, Deangelo, sports (Uhh what?), and the precautions her and the other servers take to stay safe in the city. She was lovely and made me feel so comfortable. Dinner was fantastic, especially those crabcakes which had to be deep fried. Can’t go wrong with that combination.