Well, I haven’t been this impressed with a restaurant in a while! East Coast Grill has been around as long as I can remember and I have never heard anything but rave reviews so I can’t really tell you why I haven’t been there before. Maybe its because they always seem so crowded anytime I have gone by? Or maybe I don’t spend enough time in Inman Sq? I don’t know but I do know that I will be going back often.

We got there around 8pm and sat at the bar for a drink while waiting for a table. We squeezed ourselves into the two seats right by the window, in front of the oyster bar, where we were sure we were cramping the date next to us. The bar and restaurant alike are both busy and lively but, other than the two little seats we snagged, doesn’t feel too crowded. We both ordered the House Margaritas which came with Sauza Conmemorativo Tequila & Grand Marnier.I’ve recently become a big Margarita fan and these were spot on. Frankly, I don’t know if they could taste any better.

A table was ready for us about 10 minutes later. Everything on the menu looked great, its all seafood and bbq which I think is a great combo, but a couple of things stood out. For starters, the oysters of course.

Our waiter was very knowledgeable about the house oysters as well as the oysters they had on special. He said they always have the Island Creek Oysters from Duxbury as they just think those are the best. We were sold and got a half dozen to share. They were delicious, just lovely. 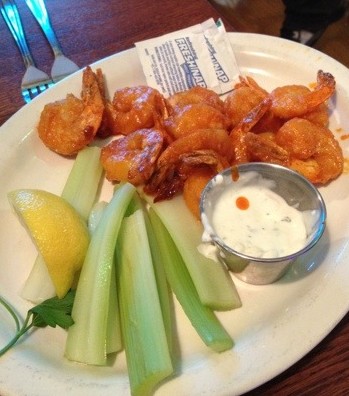 We then got an order of the 1/2 Pound of Buffalo Fried Gulf White Shrimp with Maytag Blue Cheese Dip & Celery Sticks. I have been obsessed with buffalo shrimp ever since having them at Red Bones years ago (back when I was a pescatarian so alternated between the buffalo shrimp and catfish fingers) so anytime I see them on the menu I have to get them. These were great big juicy shrimp just lightly battered and fried then smothered in buffalo sauce. Delicious.

For my entree I got another starter as I already had a good amount of oysters, shrimp, and margarita in me. I ordered the Chile Crusted Black ‘n Blue Tuna Taco with Arugula, Avocado, Lime Pickled Jicama & an Orange – Chipotle Glaze. Holy crap, you guys. This was the best taco I have ever had in my life. No joke. It was exploding with flavor and yet was light and fresh. Amazing.

Overall, fantastic service, great atmosphere, and amazing food. Great place for a group (make a reservation), with friends or even on a date. I would go back anytime, just let me know when you are available.

How did East Coast Grill measure up? 4.75 Spoons!