Summer in New England, at least for me,  is all about spending time near, on, or in the water. Whether that be on a boat, island, dock or beach there’s just something about breathing in that salty air and having the sun beating down on me that puts me in the best of moods. I wasn’t going to let my broken foot keep me from the beach. I was that girl hobbling along the beach in my bikini and air cast. Keeping it classy.

That being said, whats the best way to wrap up a day at the beach? Seafood, and lots of it.

This particular beach trip to Crane’s Beach landed us at Olivia’s by the Sea afterwards for a late lunch. Olivia’s is casual (you can comfortably go in your beach cover up) but still clean and nice. No frills. The menu, which is extensive, has almost anything you can think of from pasta to sandwiches to fried seafood plates. We opted for the Fisherman’s Platter  which came with fish, shrimp, calamari, and scallops (which we substituted more fish for as I’m allergic) , topped with some onion rings. First of all, this platter should be shared between three people, not two. Its huge. Everything was delicious, as fried food tends to be, and not too greasy or heavy. It was a good end to a beach day. 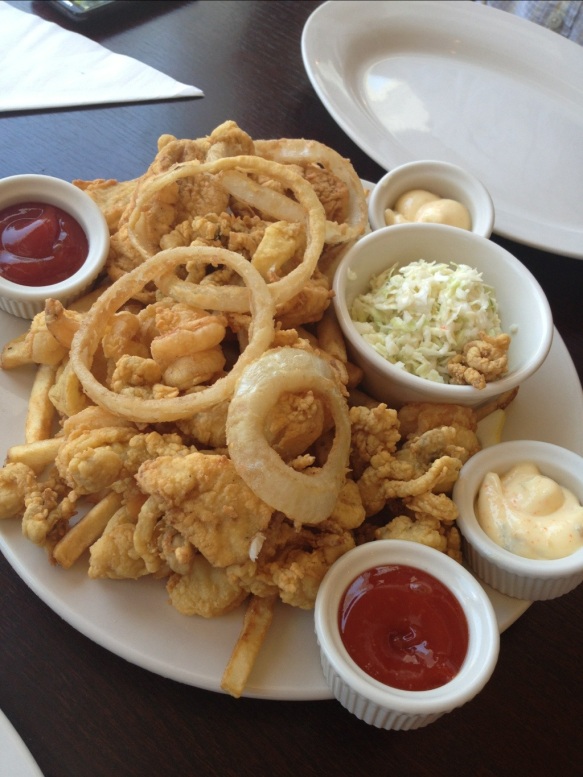 Overall, Olivia’s by the Sea has decent service, is clean, and good standard beach fare. There wasn’t anything about Olivia’s that struck me as special or makes me want to rush back though, it lacks  certain charm. I wouldn’t not go back, I just wouldn’t seek it out.